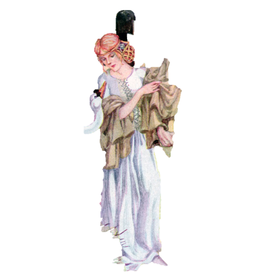 The killers never left her alone. One day the leader told her: “ Tomorrow night we will have to go all in the palace of the King, “ (and he tells her the name), “ to take away the treasure. You must come too.”
That King was the young man’s husband, and she then wrote him a letter advising him to arm his house well because he was in danger. And when at midnight the murderers found themselves at the door of the palace and entered one by one, the servants barricaded and hidden there one by one killed them. Thus the chief died and five others; all the others who came from here, fled, and left the young woman alone there, dressed as a murderer as well. The servants took her, bound her, and took her to prison. From the cell, the young woman saw that the gallows were already planted in the square. Only one day to the end of her seven years of silence. In gestures she asked for the grace to wait for the next day to make her die, and the King gave it to her. The next day they took her to the stage and she, from the first step, made a sign that instead of the three wait the four. The King granted it to. Four o’clock sound, she already climbed the other step, when two warriors came forward. They introduce themselves to the King and ask him the license to speak.
“ Speak!” – says the King
“ Why is that young man going to death?”
And the King explained it to him.
“ Then know that he is not a man but he is our sister!” and they tell the King how she has been silent for seven years. And they say to her: “Speak well now, we are safe.”
They freed her from the shackles, and she, in the presence of all the people, said, “I am the bride of the King, and by my mother-in-law’s wickedness my creature was put to death. Go there on the roof and take that box and see if I had a dog or a baby “.
The king sent the servants to get the box, and there were baby bones inside.
Then all the people began to shout: “On the gallows, instead of her, the Queen and the godmother!” So the two old women were hanged, and the young woman returned to the palace with her husband, and the two brothers became first men of the Court.