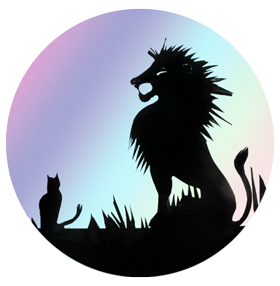 Once upon a time there was a man who had a cat who followed him everywhere.
One day the man went out into the woods to chop wood. The cat followed him as usual. Suddenly a lion appeared, stopped in front of the cat and began to examine it carefully. The lion wondered what kind of animal this was. In a strange way it resembled him: with the round head, the paws …! But it was so small!
When he recovered from his surprise, he said:
“Little animal, you are an image of me, same head, same paws, same fur … But why are you so small, skinny and pitiful?”
“Oh,” said the cat, trembling with horror, “if you would endure the suffering I do, you would probably be as small as me.”
“How then?” The lion roared angry. “Show me the one who caused your trouble, and I’ll tear him apart.”
The cat pointed to the man who walked in front of them. With a jump, the lion was on top of him.
“You are an evil creature! It’s your evil, which made this poor animal so weak and small.!
“I am human, I have the power,” the man replied.
“We shall see about that. Get ready. I challenge you to fight. me ”
“Please, but I know your claws are sharp and ready for battle. You are the biggest and strongest animal of all. I have to go home and get a weapon. ”
“Ok,” the lion said. “I’ll wait here until you come back.”
“No! Then you can run away while I’m gone. Come closer so that I can tie your paws. ”
“Tie my paws ! Ok, if you think I will run away.”
With the axe the man cut of a tree branch and cut them in the middle. He clasped the lion’s fore-paws between the two parts, and with thin wigs he tied them togther. Then he did the same with the lion’s hind-paws.

When he was sure that the lion was securely tied up, he began to beat the lion with a stick.. The lion roared in pain and shouted for help.
“Dear, oh dear the lion called. “How long will he continue to hit me like this?”
“Yes,” said the little cat, “he will hit you until you get as small as me.”
“Stop,” the lion said, “stop! I can never be so small! Oh, how I admire you, little cat, who has endured this human cruelty for so long. ”
“Man, I beg you to stop! The forest is full of animals of my kind. If you give me my freedom back, I promise to tell them all not not attack you any more. Let’s be friends! ”
The man stopped the beating and released the lion, who hurried into the forest.
“Brother,” cried the cat after the lion, “it is with such a strange cruelty that man has made the animals so small!”
The man turned home, always accompanied by the little cat, while the lion disappeared into the deep forest.