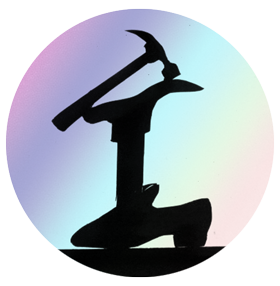 Once upon a time there was a poor shoemaker, who repaired people´s shoes. He earned just enough for his daily bread. Still, he was always happy.
When he had finished his work for the day, he did not even have a real home to go to. He slept in the hut where he repaired shoes. Nevertheless, one could always hear him sing a beautiful song before he went to sleep.

Not far from him lived a rich man who used to hear the poor shoemaker singing his happy song every night. The rich man often thought : “He works from early in the morning till late in the evening, and he only earns enough for bread for the day. But he is happier than me. I’m rich, yet I’m not happy,” The rich man decided to invite the poor shoemaker home. The shoemaker came and the rich man said to him:
“I know you’re poor and yet I hear you sing every night, so you must be a happy man.”
The poor shoemaker said, “I’m happy because I work all day to earn my bread. If you have bread to eat and clothes to put on – what more do you need in the world? ”
The rich man was very surprised when he heard the poor man’s answer.
“Do you think you would be as happy if you had more money?” Asked the rich man.
“Yes”, was the answer. So the rich man gave the shoemaker golden coins and let him live in his house.
On the first day when the poor man received the gold, he said to himself:
“If a thief comes and takes my gold, I’ll be poor again.”
The poor shoemaker did not sleep a winkl from all the worrying the first night in the house of the rich man, nor the second night. This continued every night. The happiness he knew earlier was gone and he did not sing anymore. Then the shoemaker said to himself:
“The gold I received did not make me happier. It just made me sad and sick. I’d rather be a poor shoemaker who earns his daily bread and be happy again.”
The shoemaker gathered all the gold and gave it back to the rich man. The shoemaker went back to his hut and continued to make shoes. And ever since, you can hear him happily singing a beautiful song every evening.