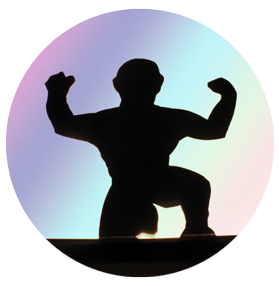 Pouriya Vali was an Iranian champion in wrestling. He was a great hero in Iran and many other countries. Everyone loved him and he was a hero of the people.
He practiced and competed throughout Iran and in many other countries.
One day he saw a woman crying and he asked her, why are you crying?
The woman replied that her son had fallen in love with the king’s daughter! And the princess in him. But the son would never be able to marry her because he was an ordinary boy and not a prince.
The king had told the son that his only chance was if he competed with Pouriya Vali and could defeat the great hero. Otherwise they would never be allowed to marry! And that of course was impossible. No one could defeat Pouriya Vali!
When Pouriya heard this, he decided to compete with the son and to let him win.
Pouriya Vali competed with the woman’s son and allowed him win.
The boy got married to the princess.
But all the people in the whole country became so surprised and disappointed when Pouriya did not win that they began to tease and humiliate him.
Then he decided to quite all competitions.
When he died, everyone was told truth of what had happened and why he had done as he did. He had sacrificed his dignity for love.

Today Pouria Vali is remembered as a great sufi. Learn modesty if you desire wisdom.

A high land can never be irrigated.