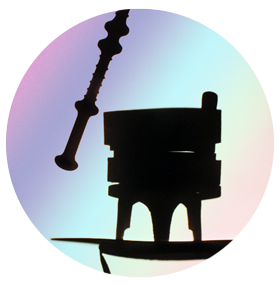 There was once a poor woodcutter who had a large family to support. One day when he was out in the woods, he found an old half-rotten tree. It will be easy to chop down, he thought and began to chop. He had barely lifted the ax when a thunder appeared and asked the man why he wanted to destroy the home of the tree spirit. The man explained that it was his way of supporting his family. I can better arrange that, said the tree-spirit and gave the man a mill. Go home, he said, and put this on the table and you will soon have so much couscous that you can support your family, and also have a lot over which you can sell on the market. But don’t reveal the secret to anyone, said the tree-spirit.
The man thanked him and went home, put the mill on the table and it was filled with couscous! The man showed this treasure to his wife, who was overjoyed. Now they didn’t have to starve. She promised to keep it a secret.
Every day, the woodcutter went to the market and sold couscous. For the money he bought clothes and household items for the family, whose lot improved day by day. This was noticed by the neighbors. A neighbor asked if they had a legacy. But the wife revealed nothing. The neighbor continued to ask questions and one day the wife could not resist; she showed the marvelous mill. The neighbor was filled with envy. The next day she came back and said that they were having a big party and wondered if she could borrow the mill. The wife saw no problems with that, and lent the mill. The neighbor immediately sent her husband to the market to buy a mill that looked exactly the same.
And it was that mill copy the neighbor returned next day.
That mill did not make couscous. Soon the woodcutter family was poor again and had to sell everything they had, and when there was nothing left, the woodcutter had to go out into the forest again to find wood.
He came to the same tree, lifted his ax, and the spirit appeared. You again! Are you not satisfied with your mill? The man told him that the mill had ceased to function and the spirit said that the man had failed to keep his gift secret, but the spirit had a solution. He gave the man a stick and very clear instructions.
The man went home and talked to his wife; they invited their neighbors to party. As soon as they sat down, the man said he wanted his mill back. The neighbors pretended they did not understand. Then the man took out the stick, held it up, and shouted, “Stick strike”
The cane moved forward over the neighbors’ backs and barely had it started when the neighbors acknowledged the theft and promised to return the mill.
The poor woodcutter got his mill and he lived happily with his family for all his days.