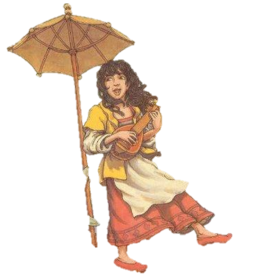 Once upon a time there was a fisherman who could never fish enough to buy foods for his family.
One day while collecting his fishing nets, he felt a really heavy weight: so he pulled and pulled and he saw what he fished: a huge crab, so huge that even with both eyes wide open you couldn’t see it all.
The fisherman got back home with the crab on his shoulders and said to his wife:- Put the pot on the stove, I will be right back- and went to the King’s Palace to sell it.
The king saw the big crab and said to the fisher:- What am I supposed to do with a crab like this? Go sell it elsewhere!-
But right in that moment, the Princess entered the room and begged his father to buy the Crab to put it after in the fishpond with the mullets and sea bream.
So, the Father bought the crab to make his daughter happy, he payed the fisherman enough gold coins to buy food for a whole month and put it in the fishpond.
The Princess never tired of watching the crab and she never went away from the fishpond. She learned everything related to that crab and she discovered that it disappears from noon to three in the afternoon, but she did not know where it was going.

One day, a poor wanderer knocked at the Palace’s door and the Princess threw a bag full of gold coins at him but the poor man couldn’t be fast enough to catch it so the bag flew into a ditch.

The vagabond jumped into the ditch to look for it, he went underwater and began to swim.
The ditch communicated with the fishpond through an underwater canal that nobody knew. The man kept on swimming until he got into a beautiful pool in the middle of a large room covered with curtains and with a laid table.
He hid behind the curtains and just after the clock turned noon the crab jumped out the water with a fairy on his back.
The fairy touched the crab with her wand and from the hard shell came out a handsome young man. He sat on a chair and, after the fairy did another magic trick and filled the plates with food, he started eating.
When the young man ate and drank enough to be satisfied, he went back into the crab’s shell; the fairy touched him again with the wand, did the magic and jumped on the back of what was a crab again.
The vagabond saw everything and ran straight to the princess to tell her the secret.

 Dear Father, now I know where the crab go from noon to three! – said the daughter to the king – Tomorrow we are going together to see him! –

So the day after came, at noon the fairy emerged on the back of the crab, one little twist of her wound and the young man went out to eat.
The Princess liked the young man a lot and fell in love immediately, so she slipped inside the empty shell without being seen by anyone.

When the young man returned to the rind, he found a beautiful girl waiting for him, so he asked what she was doing.
 I want to free you from this spell, teach me what to do – said the King’s daughter.
 If you want to free me from this spell, you have to go to a rock by the sea and sing and play some music; the fairy goes crazy for music and she will surely come out of the sea to listen to you, she will ask you to play more songs- he answered – at that point you will have to ask the flower she wears as payment, once you have that flower I will be free because that flower is my life –

The day after the Princess went to the seashore and sat on a rock, she started playing the violin. From the waves, the fairy attracted by the music came out and asked the girl to play some more music.
The Princess, as the young man said, asked some payment such as the flower the fairy has on her head – Here you go! go get it! – and the fairy threw the flower the most as far as she could. The lady jumped straight into the water and could get the flower just in time.
At that right moment, the young lady heard a voice saying:- You gave me back my life, you will be my bride -.