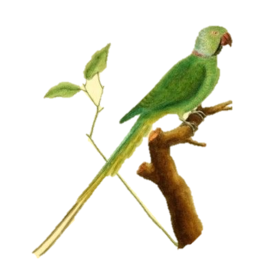 A merchant must leave for work but does not want to leave his daughter alone because a king has set his eyes on her. The merchant makes his daughter promise that he will not go out and will not open to anyone until his return. She lets a parrot leave her to keep her company.

The parrot tells the girl a story. Once upon a time there was a king with a single daughter. The princess felt lonely so they had made her a doll identical to her with which to play. The princess carried the doll everywhere and it was often difficult to distinguish them. One day the king’s carriage was attacked by the king’s enemies who killed him and took the princess away, leaving the doll in the carriage. The enemies, however, could not bear the cries of the princess and let her go alone through the woods.

The girl arrived at the court of a queen and put herself at her service: the queen loved her so much that the envious servants told the girl that the queen had a son who had died. The girl talked about it with the queen, not knowing that the queen herself had put the death penalty on anyone who spoke to her about her son. But the queen did not want to kill her and locked her in a dungeon. At midnight the girl saw five men go by: four wizards and the queen’s son, alive but their prisoner. The girl made it known to the queen, who sent the soldiers to rescue the prince and then promised him as a husband to the girl. But the girl did not want to marry him, but he gave money and clothes to go to another city.

In this city there was a sick prince, so the girl introduced herself to the king and said she was a doctor. Left alone with the prince, the girl found a trapdoor under his bed, and at the end of the corridor there was an old woman who was boiling the heart of the king’s son to take revenge on the king who had killed his son. The girl recovered her heart and made him eat to the prince, who healed. The king promised the prince to the girl, but she did not want to marry him and went away.

The girl arrived in another city where the prince had been bewitched and could not speak. She hid under her bed and at midnight saw two witches come in through the window: they were the ones who put a little stone under the prince’s tongue so that she would not speak. The following night the girl stole the pebble and since the witches searched for it but could not find it, they were forced to escape. The girl was appointed court doctor, but decided not to stay.

In another kingdom there was a king who had found the doll in the woods, and every day he cried because he was so beautiful but he was not alive. The girl then showed up revealing that this was her doll, and the king, seeing her identical to the doll, took her as a bride.

While the parrot tells this story to the merchant’s daughter, the king tries to send her a letter through an old woman, but the girl is so caught up in the parrot’s story that she wastes no time to open either to her or to others, and the same parrot prolongs the story because the girl does not open to anyone. But arrived at the recognition of the king and his bride the parrot no longer knows how to continue the story, but fortunately knocking on the door is the merchant. The parrot then turns into a handsome young man and reveals that he is a king: knowing that his rival wanted to kidnap the merchant’s daughter he had disguised himself as a parrot and had honestly entertained her with stories to prevent it from happening. The merchant’s daughter then marries the king who told her the story, while the other king dies of envy.