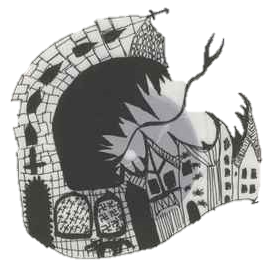 He went back on. One evening, he arrives at a magnificent palace. He knocks, and an old man with a beard to his feet opens:” What do you want, good young man?”
“ I’m searching for the place where you never die.
“ Here you are! This is the place where you never die. As long as you stay here with me, you will be sure not to die.”
”Finally! I did some laps! This is just the place I was looking for! But are you happy, then, that i’m here?”
“ Yes indeed, i’m happy: you keep me company.”
So the young man settled in the palace with that old man and lived as a gentleman. Years passed that nobody noticed: years, years, years. One day the young man says to the old man: “ Wow, I feel very good here living with you”
“ Good, but I want to go and see a little how my relatives are. “
“ What relatives do you want to go see? By now they will all be dead for a long time.”
“ Well, what do you want me to say? I want to go and see my places, and who knows, maybe I will meet the children of my relatives’ children.”
“ If you really have this idea in mind, I’ll teach what to do: Go to the stable, take my white horse, which has the virtue to go as fast as the wind, but remember: don’t you ever dismount from the saddle, for any reason, because if you do it, you will die immediately.”
“ Do not worry: I’m too scared to die!”

He goes to the stable, takes out the white horse, mounts it and goes away like the wind. He goes to the place where he met the old man with the duck: what it was first a sea, now there’s a large prairie. He sees a pile of bones: they were the bones of the old man. “Look,” said the young man, “I did well to pull straight; if I was with that old man there, at this time I would be dead too!” He continues his way. Where once there was a great forest, that the old man had to cut with his knife, now you could not see a tree anymore. “Even here,” thought the young man, “I’d be pretty dead, long ago!”
He goes now to the place where he met the first old man: where the great mountain was once, now there is a flat plain like a pool table.
“More than dead, I would be, with this one here!”
He goes and goes and arrives to his country, but it had changed so much that he no longer recognizes it. He looks for his house, but even the road exists anymore. He asks for his family, and relatives and for his surname but nobody had even heard it. He feels sick. “You might as well go back now,” he told himself.
He turns the horse, and takes the way back. It was not even halfway when he meets a carter, who was driving a cart loaded with old shoes, pulled by an ox. “ Lord, give me charity!”said the carter “Come down for a moment, and help me lift this wheel, which went down from the roadway.”
“I’m in a hurry, I can not get out of the saddle,” said the young man.
“ Do me this Grace, see that I’m alone, now that evening is coming…”
The young man lets himself be moved, and dismounted. He has still one foot on the stirrup and one foot already on the ground, when the carter grabs him by the arm and says: “Ah! finally I took thee! You know me? I am Death! See all those shoes smashed there in the wagon? They are all those that you made me consume to run after you. Now you have fallen for it! You all have to end up in my hands, there is no escape!”
And to the poor young man has, also, to die.