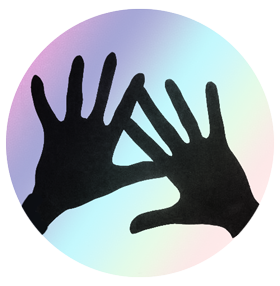 There was once a king who loved to go hunting. The king had a slave who followed him daily with him hunting. The slave prepared the king’s rifle. Every time the king shot a prey, he was very satisfied.
One day when the slave handed over the rifle, the king stumbled and a shot went off and the king’s hand was hit. Three of his fingers were shot away. The king was furious and told the slave: “Wretch! See what you’ve done. You’ve ruined my hand. I’ll throw you in jail.” The king called for a guard and the devastated slave was taken away.

Sometime later, the king went hunting again. In the deep forest there were wild cannibals. They were looking for food and saw the king. The cannibals grabbed him to eat him. Then one of them discovered that three fingers were missing on the king’s hand. They no longer wanted to eat him because cannibals only eat whole people!
Very happy about being alive, the king hurried home. He then came to think of his slave whom he had so brutally thrown into prison. The slave had not deliberately injured him, and now the accident had actually saved the king’s life. The king let the slave go and said, “You have saved my life!” “If I hadn’t hurt my hand, then I would have been eaten by cannibals, they didn’t want to eat me because I was missing three fingers! The slave said, you, my king, saved my life. Now it was the king’s turn to surprised. “If you had not thrown me in prison, then I would have been with you and then the cannibals would have eaten me!” Said the slave, holding out his ten fingers.