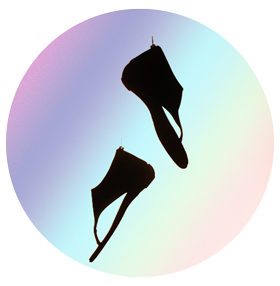 Once upon a time there was a king who had seven daughters. Every morning they came to the king and asked for new shoes. They showed him their shoes that were in a terrible condition.
The king did not understand how they were able to wear out their shoes in only one day.
What he did not know was that every night the daughters left the palace through a secret passage and went to the seashore where they danced all night. Before sunrise they returned unseen to the palace.
After some time the king decided to find out what happened to the shoes. He asked one of his servants to keep a watch outside the daughter´s room.
The daughters however found out and in the evening the eldest girl went out and offered the servant some tea. In the tea they had put a mixture that sent him to sleep. This continued night after night. All the kings servants were put to sleep and the daughters kept asking for new shoes.
Finally the king said that anyone who could find out about the shoes would be allowed to marry one of the daughters.

A young man volunteered. In the evening like all the others he was offered a cup of tea by one of the beautiful princesses. He took the cup, smiled and pretended to drink a little. He told the princess that he liked the tea very much and he started to tell her a story, now and then he pretended to take a sip of the tea. Just a little sip. He continued his story but spoke more and more in a very slow voice. The princess got very bored and she was also eager to go back to her sisters. When she lost her focus the young men emptied his cup into a flowerpot and pretended to go to sleep.
The princess went back to her sisters and they opened their secret door and went out. But this time the young man watched them. The next day he searched the outside of the palace till he found a door that could be linked to the passage from the room of the girls. The following night he waited for the girls and went after them and discovered their nightly dance on the beach. Next morning he went to the king and revealed the secret of the daughters. Now he was allowed to marry one of the daughters. And luckily enough one of the girls fancied the young man and said she would like to marry him.
Luckily enough the young man was a shoemaker by profession. He could now provide new shoes for the kings daughters so that they could continue to dance on the beach!
If they have not stopped, they might still be dancing!