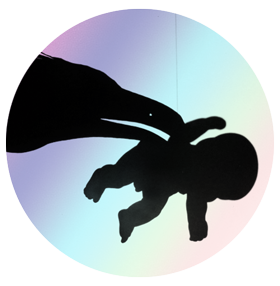 In ancient times there was a king, but he had no son. After many years, God gave him a son. The child had red skin and white hair. White hair like an old man’s hair.
No one dared to tell the king that his son had white hair, but her midwife was wise and she went and told the king : God has given you a beautiful son and he has white hair.
The king became very angry, if the people got to know that the king´s son had white hair, they would not respect him anymore. He decided to leave the son alone in the desert to die.
When the child was alone in the desert,a big bird caught him to feed his children.
When the young birds saw the boy they would not eat him. The bird then took care of him as his own child and he grew up and the bird called the boy Zall.
One night the king saw an old woman in his dream . She told him:, your son is still alive and a big bird takes care of him.
The king woke up and was happy because he understood that his son was alive. The king went looking for his son.
Finally he found him. He saw that he had become a young man. The boy did not want to go with his father, but the bird told him to go with the father so they went together. They went back to the country of the king, where they lived for a long time and when the old king died the boy with the white hair became king.